Growing up in Ontario, Mark Scriver paddled anything that floated. He started canoeing with his family as a kid, then drifted into kayaking, progressing from flatwater to whitewater. In 1985, Scriver moved to Ottawa and joined the crew of canoeists and kayakers who played on the  standing waves that rise for a couple months every spring just off Bate Island on the Ottawa River in the west end of the city. Scriver, a wilderness guide with Black Feather for 35 years and co-author with Paul Mason of Thrill of the Paddle, never really surfed. He wasn’t around the ocean much. But after getting into stand-up paddleboarding roughly 15 years ago, Scriver brought his 11-foot SUP to Bate Island, paddled across the eddy line and slid onto what locals call the “top wave,” a glassy-faced pocket fringed with foam.

And there he was, fleetingly balanced, paddle in hand, the river rushing and roaring beneath his board, and he was hooked. “I got a little taste of surfing every few attempts,” recalls Scriver, “and then I figured out the move: tilt this way, steer that way, and you’re on the wave. Once you finally get it, it’s as comfortable as being on a bike, and it feels like you can stay out there forever.”

There’s no way in hell I feel like I can stay out there forever. Since starting to SUP river surf at Bate Island in spring 2018, my progress has been slow and painful. I’m still at the “little taste of surfing every few attempts” stage. To me, it feels nothing like riding a bike. But the preceding words and interview with Scriver — the opening of a recent story about SUP river surfing that I wrote for Mountain Life magazine — capture the thrill of the sport, and why I fell head-over-heels (often literally) in love with it.

The waves at Bate are typically limited to a few weeks every spring when the water level in Ottawa River is high. 2019 was a tough year. The water was too high, which caused damaging and dangerous flooding and prompted authorities to close the river to recreational users for a couple weeks. Bate Island itself was closed and the clean-up took a long time, so even after the Ottawa River was re-opened, surfers had to walk to the island with their gear (or, in my case, paddle over on a SUP from Remic Rapids on the Ottawa side). Which meant that my second season of learning to river surf was truncated.

But we got a bunch of rain last weekend, raising water levels that had been dropping steadily … enough rain to make the top wave at Bate rideable again. My beautiful and talented and patient (and amazing photographer) wife Lisa Gregoire joined me on the island for an evening surf session; these are her pictures and videos.

Me crossing the eddy line: 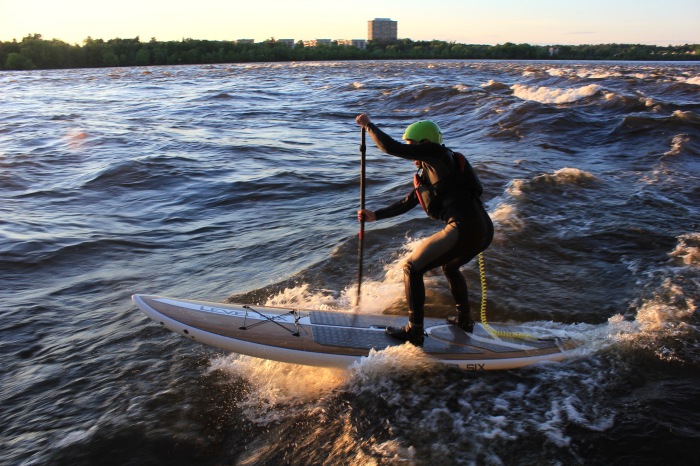 Me unsuccessfully attempting to catch the wave:

Me catching it (as a fishing guide I was on assignment with once told me when I landed a 30-pound salmon, “even a blind squirrel gets a nut once in a while”): 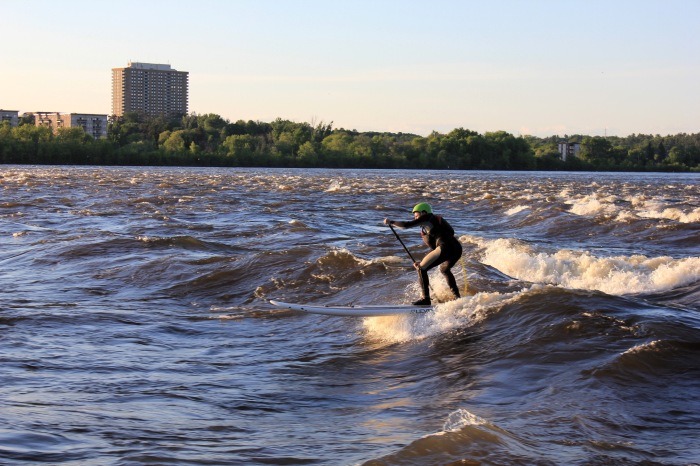 Me enjoying a gorgeous June night and having a hell of a lot of fun:

And me, after falling yet again and swimming through the rapids, paddling back for another run: 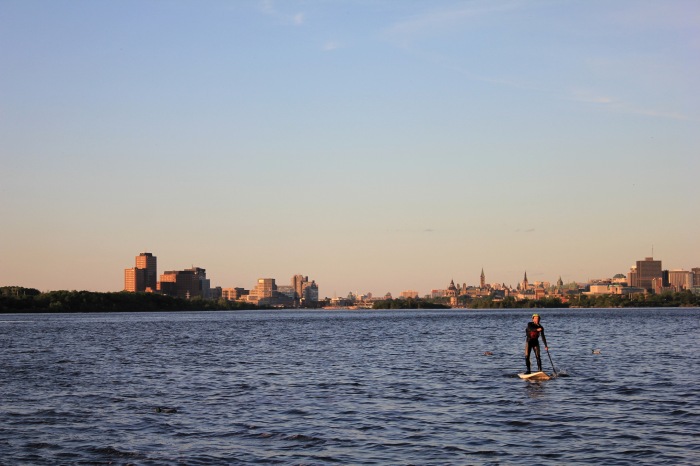 The roots of river surfing, as I wrote in Mountain Life, go back to the 1970s in Munich, Germany, where a standing wave on the Eisbach — a manmade arm on the Isar River — began to draw attention. At first, riders stood on wooden planks and held onto ropes attached to a nearby bridge. Then they realized they didn’t need the ropes. But the activity was deemed too dangerous and illegal, and short-board surfers often had to run from the police after a session.

From Munich, river surfing has spread throughout Europe and jumped to North America, with kayakers and canoeists starting to cede space to surfers and SUP surfers since the early 2000s. In Canada, Olympic kayaker turned paddleboard designer Corran Addison reportedly surfed Montreal’s Habitat 67 standing wave on the St. Lawrence River in 2002, inspiring thousands of others to follow. (Including, next week, me! I’m heading to Montreal on assignment for Paddling Magazine and have a date with the St. Lawrence and a SUP surf instructor from adventure tourism leader KSF.)

Here in Ottawa, I’ve be lucky to have an opportunity to learn from Bate Island SUP surfing regulars Larry Norman (an emergency room doctor who competed for Canada in slalom canoe in the 1992 and 1996 Olympics — and loaned me a helmet the first time I showed up) and Jodi Bigelow, who runs a SUP lesson and rental business called Paddlefit just across the Ottawa River in Quebec. I’ve also met and received tips from Paul Mason, the son of legendary canoeist Bill “Path of the Paddle” Mason, which is as close as you get to a paddling deity in this country.

Larry, Jodi and Paul all make SUP river surfing look easy. Which gives me something to strive toward.