After last weekend’s cold immersion into the new paddling season, my second outing of the spring — a post-work, pre-storm run down the Rideau River from my office in the Canada-India Centre on the campus of Carleton University to Stanley Park in New Edinburgh — was a little more successful.

It started with a blessing from Gandhi (or, if not a blessing, then at least a tacit silent endorsement). One might not associate India with stand-up paddleboarding, but there are a couple of cool connections between the country and the sport, including a 3,000-kilometre, 101-day SUP expedition down the Ganges in late 2016, and the story of Tanvi Jagadish, a teenage girl who is India’s first professional SUP racer and surfer. 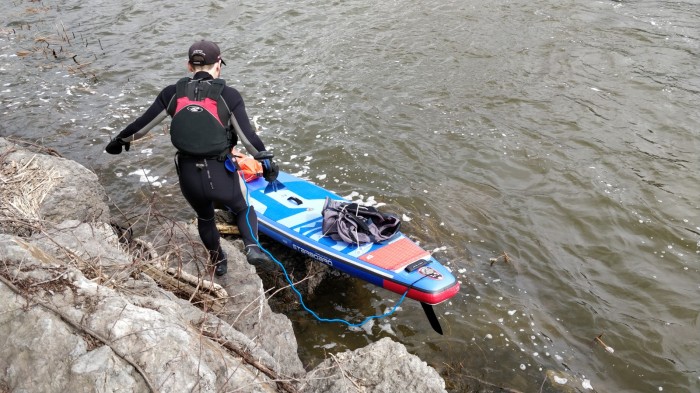 With help from my amazing colleagues Jesse Stewart and Harry Sharma (who shot the video and photos for this post, respectively), I got onto my Starboard 12-foot, 6-inch inflatable touring board and pushed off from the rocky shoreline.

About 70 minutes and 10 kilometres later, I got off the river before it falls into the Ottawa, deflated and stashed the board into its backpack, and caught a bus home.

It rained and snowed for much of this past weekend, which isn’t pleasant — but all this precipitation has at least raised the water level on the Rideau, which has been below the average flow rate so far this spring. Which makes a shot at the rapids just upstream from my put-in spot possible a little later in the week.