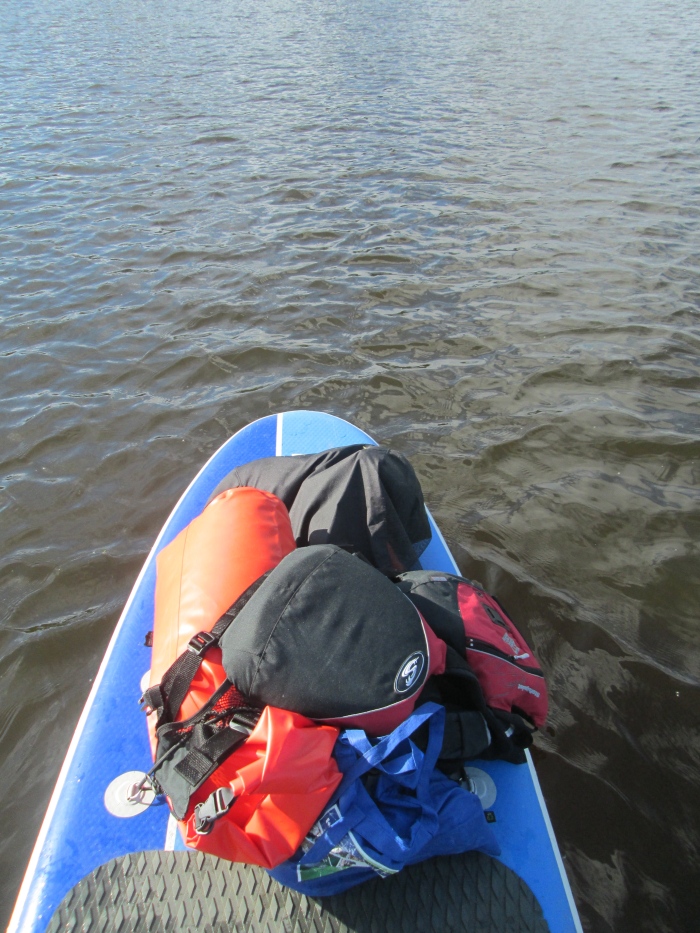 It was Race Weekend in Ottawa this past Saturday, an annual running extravaganza built around a marathon and several shorter distance races, but even though I love running, I opted for a solo — and longer — adventure. On Saturday morning, I took a VIA train to Smiths Falls, about 50 minutes south of the city, with my inflatable stand-up paddleboard. There were no taxis at the train station, so I walked to the highway and stuck out my thumb. Within two minutes, a man leaving the train station parking lot had pulled over. “I never pick up hitchhikers,” Steve told me, “but then I saw you standing there with a paddle.”

Less than half an hour after getting off the train, I was on the Rideau River at the lockstation in downtown Smiths Falls. It was sunny and warm, a couple guys in kayaks were fishing for pike, and the water was glass-smooth, reflecting the clouds above so it felt like I was paddling through the sky. Thus began my two-day 87 kilometre personal SUP ulta-marathon along the Rideau Heritage Route.

The Rideau Canal, which was built between 1826 and 1832, consists of 49 locks between Kingston on Lake Ontario and the route’s terminus at the Ottawa River. There are long stretches of natural river, and then locks bypassing rapids and dams. From Smiths Falls, after portaging the Old Slys and Edmonds locks south of town, I passed though a long lake-like stretch of water, where the marshy shoreline rang with chirping red-winged blackbirds and too many grey herons to count took flight. Manicured lawns gave way to farms, and the hours and kilometres passed slowly. About five hours after setting out, I reached the locks in the village of Merrickville, where one of the Parks Canada workers advised me that the dam and a spillway were open at the next lock, draining off this spring’s huge runoff and rainfall before the waterway system opens for power boaters. I would have to portage on the road for a few hundred metres. I didn’t feel like adding any extra effort to my outing but had no choice.

By about 8:30 p.m., after nearly 10 hours on the water, and half a dozen quick swims to cool off, I had reached the mouth of Kemptville Creek. It’s a five-km paddle up the creek to the town of Kemptville, where I had booked a room at an Airbnb for the night. The mosquitoes descended on me as dusk settled in, but when your hands are holding a paddle, and you want to make time, you can’t stop and swat, so I tried to ignore the dozens of bites, thinking off the deep-fried food and beer that awaited me at O’Heaphey’s pub at the end of my 50-km day.

The next morning, stiff and sore but not as stiff and sore as I expected to be, fuelled up on coffee and eggs from the South Branch Bistro, I put in at the downtown dock (shown in the main page image for this post) just past 9 a.m. I passed a couple fishing for pike in an outboard, and when they caught up to me a few minutes later they offered a lift, I hopped into their boat, reaching over the side to hold my SUP, for a couple kilometres of rest en route to the mouth of creek. 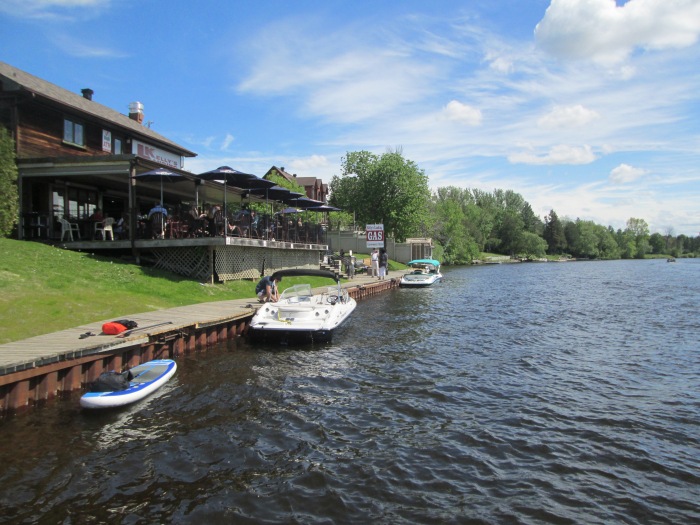 Sunday’s temperature reached the mid-20s, but frequent swims made the sun and heat pleasant. As did a cold bottle of cola purchased at Kelly’s Landing (pictured above). And I had learned a lesson the day before: reapply sunscreen often. On the 27-km stretch of open river from the creek to the Long Island locks I chatted with kayakers and cottagers on the shorelines. I thought back to my SUP tour and lessons in the Caribbean this past winter with paddleboard guru Norm Hann and worked on my stroke: concentrate on your “catch” when you thrust the paddle blade into the water; pull the board past your paddle; hinge at the waist; roll your bottom wrist; keep your top hand in the same place; use your core muscles not your arms; repeat; repeat; repeat. It worked! Despite about 20 hours on the water over two days, I had some strength and stamina left when I arrived at the Black Rapids locks in south Ottawa around 6:30 p.m. and, as arranged, called my wife for a ride home.

A few things came to me on the trip. One: my interactions with people were all mediated by the water. Whether I talked to canoeists or kayakers, people fishing from motor boats or mid-stream in hip-waders, or people who lived and cottaged on the shore, we were outside and on the water and had something in common to kickstart a conversation. Two: time and distance are fluid when you’re on the water for a couple days. I wasn’t wearing a watch and never knew exactly what time it was, and my maps were packed away in a dry bag so I rarely knew exactly where I was. But it felt liberating to be removed from the standard measures that govern our travels. Three: people aren’t good at estimating distances. Fighting exhaustion, I asked one fisherman about how far I had to go to reach Kemptville Creek. He said it was 4 km. Turned out to be at least 8 km. Those misjudgments were the norm. I asked a guy on a dock how far it was to the next set of locks. He said I had a half-hour paddle. “So it’s a couple kilometres?” I probed. “Nah, he said — at least five or six.” Considering that my pace rarely topped four or five kilometres an hour, something was off. Four: the picnic areas run by Parks Canada and the lockstations are idyllic, especially when you lay back on the grass and close your eyes for a few dreamy minutes of rest.

On Sunday afternoon, on my last stretch of river between locks, a strong tailwind kicked up. Paddling hard, shuffling my feet toward the front of the board, I caught up to waves whipped up the breeze, and headed for home. 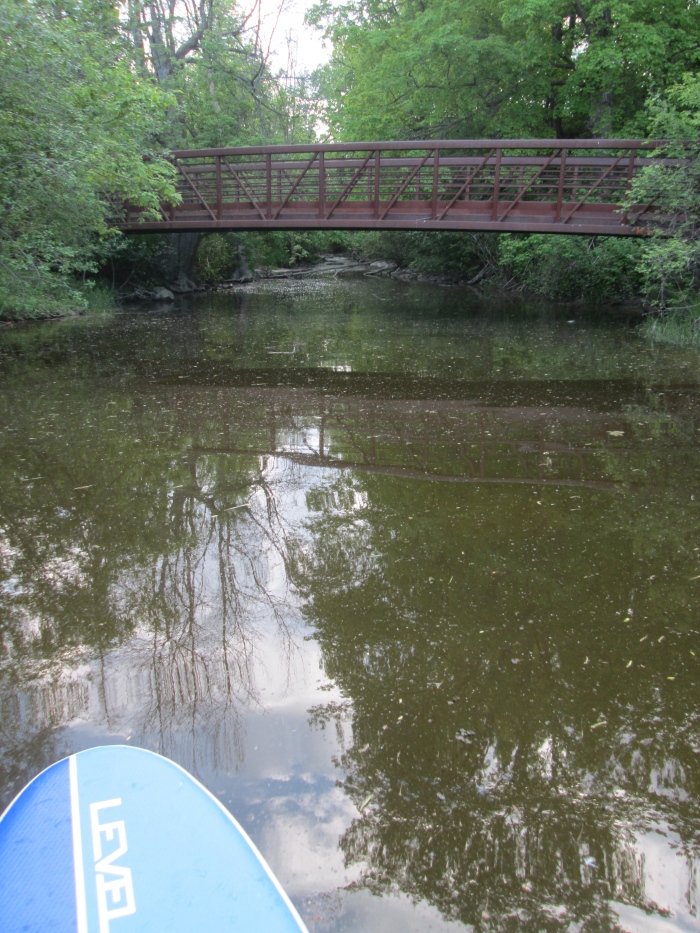 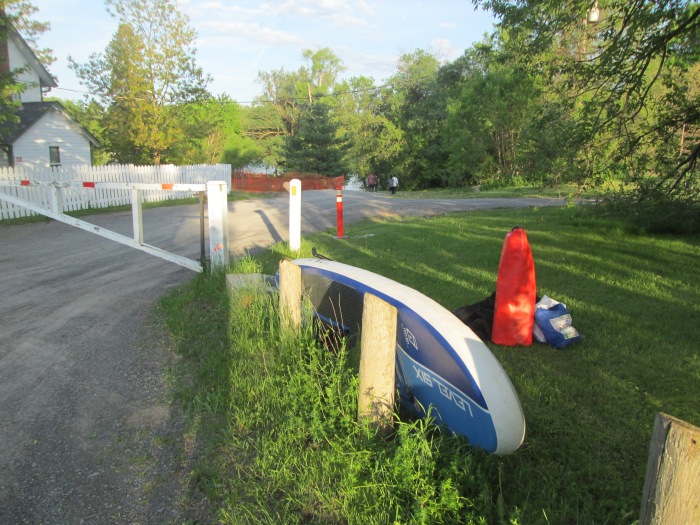